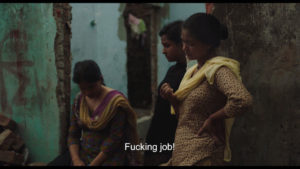 When Shimu, the courageous main protagonist of the film ‘Made in Bangladesh’ says “fucking job” – its because a colleague has died in a factory fire, not a bad day at the office. Starting a union, which is what the film is about, is not straightforward however for Shimu.

Made in Bangladesh, a searing new film by Rubaiyat Hossain, will make us think twice about the garment workers who make clothing for the West. They are mostly women – “because they can be controlled” – and their lives are desperately harsh.

Hossain tells the Guardian: “Too many people think of Bangladeshi women as victims sitting behind a sewing machine, but it is thanks to female garment workers that Bangladesh is now a middle income country. These women aren’t victims, they are often feisty, young, spirited women who are fearless and brave. All that dignity and beauty had to be the starting point for the film”

Part of the Human Rights Watch film festival this is definitely a film to see. Based on true stories, it is beautifully made, transporting the viewer to the hustle and bustle of Dhaka’s streets and alleys and giving us a glimpse of the lives of women and the choices they must make. It is available through Curzon Home Cinema

I won’t spoil the plot but these women are resourceful, dignified and brave.